It's been a while.

A whole lot has changed since my last post here:

In mid-2017 Apple released official eGPU support and teamed up with Sonnet to provide a development kit, enabling developers to leverage additional GPU cores for a variety of applications (machine learning, virtual reality, generating cryptographic hashes). You may be asking yourself, "what is an eGPU?" And the answer is relatively simple; it's a GPU that connects to a computer by way of PCIe lanes (typically over Thunderbolt 2 or 3). Which is super exciting when you think about how most laptops, especially those of the Apple variety, are not upgradeable regarding graphics.

I have been waiting quite a while to achieve a native six-monitor setup on macOS. I planned to wait for the next Mac Pro iteration, but Apple is, unfortunately, dragging their feet—hopefully not in vain! For years, I've had this envy for a particular setup on YouTube that shows a 2013 Mac Pro hooked up to an eGPU (even before Apple provided official support). The main reason I've waited so long is that I wasn't willing to invest in a nearly five-year-old desktop, and futzing around with unofficial drivers that may or may not work in the next update. If I wanted that bag of issues, I would just build a Hackintosh! Alas, this computer is where I do all of my work and has to be stable.

So, the development kit sold out rather quickly, but I was able to obtain one directly from Sonnet themselves. The unit I got was the eGFX Breakway Box with an included Sapphire Pulse RX 580 8GB. At this point, I also was running a three monitor setup using a bunch of Thunderbolt dongles, and so I picked up three new ACER K272HUL 27" panels.

The new hardware arrived, I upgraded to macOS 10.13, plugged in all the monitors, and the system crashed.

It turns out, eGPU support is still very finicky in macOS. For my particular setup, I discovered supporting six monitors was simply not possible due to the lack of free PCIe lanes. And, the eGPU must be connected during a clean boot or at the login screen—no hot swapping support yet despite macOS 10.13 allowing hot removal of the eGPU. After removing the sixth monitor and complying with the boot order, everything worked!

I returned the sixth monitor and used the cash to buy a new desk from IKEA since the six-monitor-mount was way too unstable on my previous desk. With some quick cable management, here is the finished product: 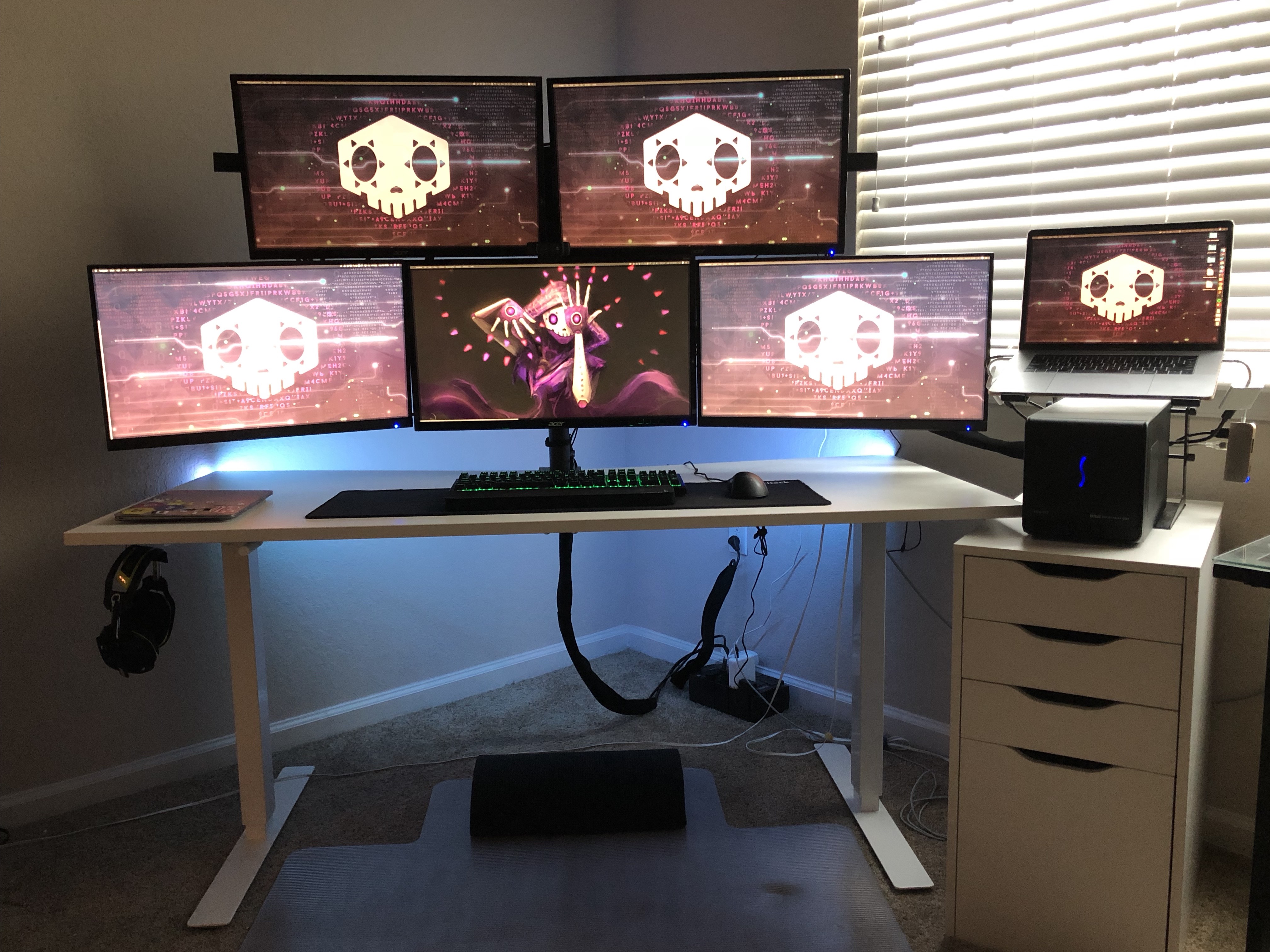 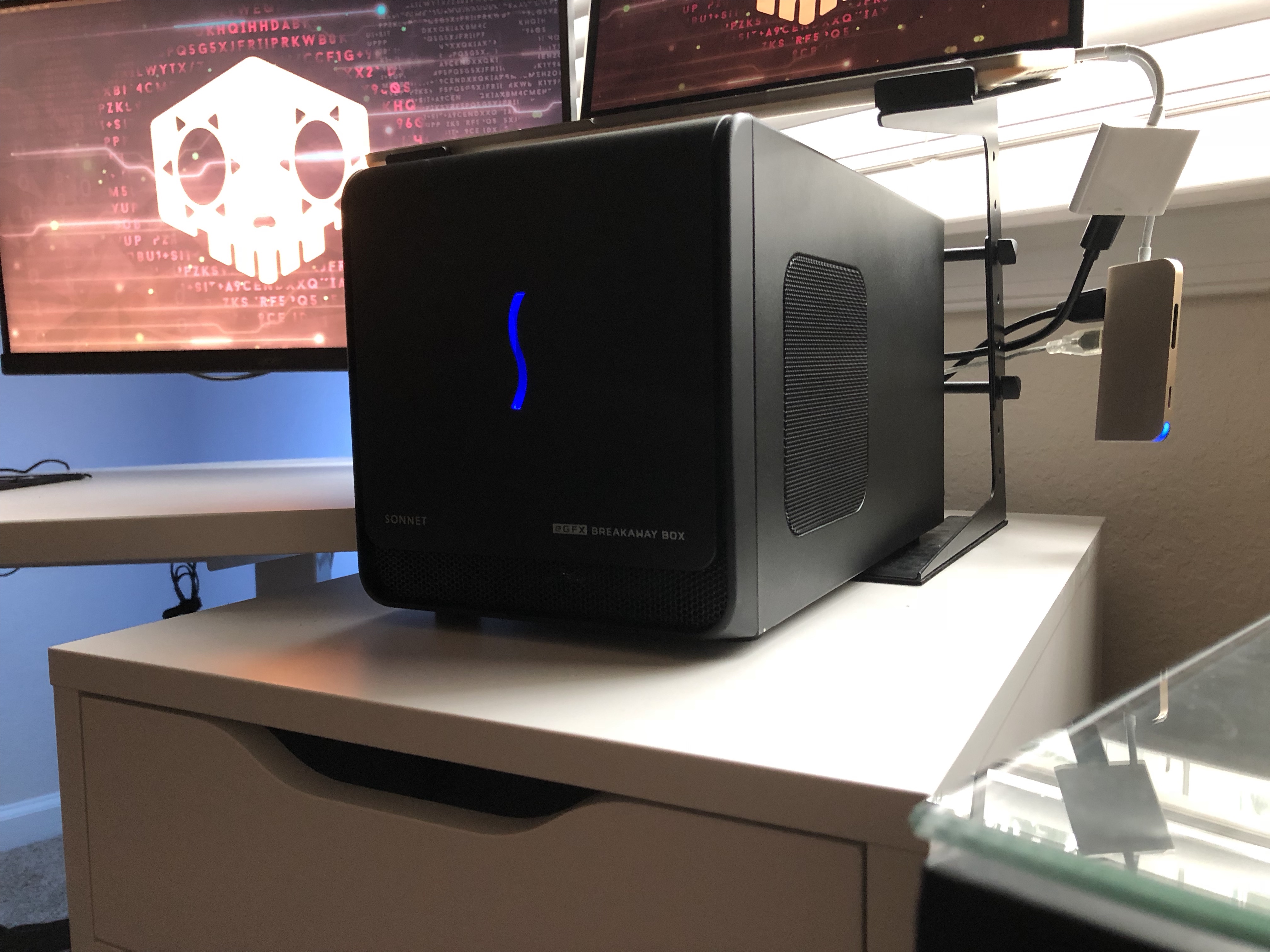 Now, do I really need five monitors? Hell no. Does it make task switching and general productivity a breeze? Absolutely, 100%.

If you find yourself in the same position, with a Thunderbolt-enabled Mac and would like to add more displays than your onboard graphics can handle, try the Build Guide tool from egpu.io. Their forums are an excellent resource when troubleshooting these type of setups.

That's it. My obnoxious dreams are [basically] a reality, and now I await the new Mac Pro.