It's cryptic and lazy.

I don’t think I’m alone on this, but when people abbreviate words it strikes me as lazy and annoying. Why should my brain spend precious resources on parsing your cryptic abbreviations just so you can save a few keystrokes here and there.

I mean, I suppose there’s a double standard here—there are some instances where abbreviations make sense (especially if it’s between a group of people who should understand the meaning).

In my life, this applies to code [mostly], and I read a nice quote the other day:

Code is written to be read by humans, not computers

Which is so true, especially these days with all the post-processors and minifiers to handle cutting down the bloat that verbose code can create. The code we write will inevitably be seen by someone else, someone not privy to the inner workings. So why, would you compound that task with another layer of abbreviation-parsing?

It’s not just code either, it’s just about any other form of written communication. Which makes sense because since the days of Aol Instant Messenger (AIM, I know, abbreviation), we’ve been abbreviating things on the web. As I get older, I find myself needing to punch these new internet based slang into Urban Dictionary because they’re that obnoxious.

My point is: abbreviate with caution and if you do, make sure your peers are on the same page. 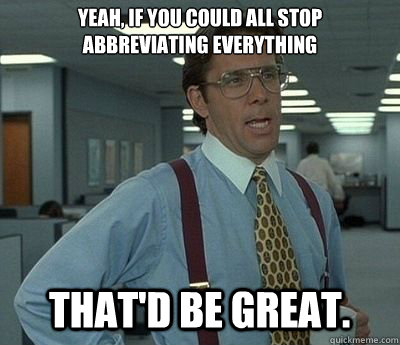 Next up: PHP 7 Awesomeness